We're One of the Hottest Clubs in Toronto | Barcode Saturdays

Clubs in Toronto are a dime a dozen, but sorting out the best place for your weekend gig is the trick here. Welcome to Barcode Saturdays, a premier nightclub nestled in downtown Toronto embodying the best of nightlife, music, clubbing, and celebration.

Barcode Saturdays got off to a blazing start in 2014 and have since been the #1 choice nightclub for party-goers in Toronto, Canada. Ever since, our guest list has been sold out every weekend, with party animals and celebrities alike flocking to the party Colosseum.

So what are you waiting for? Tune in to the hype and witness all the excitement with your gang at our regular weekend gigs.

Discover the Magic of Toronto

If you’re in Canada looking to explore its nightlife, then Toronto is the place to be for you. The city has a youthful population and an eclectic blend of past traditions and modern amenities. The city also has a multicultural population with multiple languages spoken by its populace.

Toronto is the hub of Canada’s culture, entertainment, and a host of other industries, from media and theater to sporting activities and historical landmarks. The city also attracts millions of tourists yearly who flock to witness the cityscape and soak in all its experiences. Toronto is also famous for its skyscrapers and for being the country’s financial capital.

Above all else, the city offers a clubbing escapade unlike any other. It’s one of the most happening cities in North America with a vibrant nightlife. One can find a plethora of bars, pubs, discotheques, and nightclubs in the city. Let’s look at some of the popular clubbing destinations in Toronto that are worth exploring for tourists.

Toronto infuses magic into its nights as the city comes alive inside bars, nightclubs, and other nightlife avenues. The city is primed with food, entertainment, and leisure districts that illuminate the city after the sun goes down. Here are some of the best locations where you can find the top clubs in Toronto: 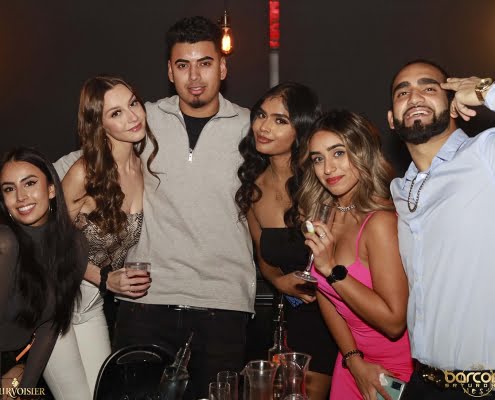 The Premier Club in Toronto

The #1 Celebrity party is now located inside of the luxurious NEST Toronto. A new symbol of excellence in Toronto nightlife with a Sound experience creates this nightlife oasis in the heart of Downtown Toronto. Hip Hop, Trap, R&B, Top 40, Latin & Reggae in the main room to set the perfect urban soundtrack for your night out.

Our guest list is open for party freaks and enthusiasts who’d like to spend their weekend on a memorable note. We’re open to ladies who always party without any entry fee at Barcode Saturdays. Moreover, our bottle booth service ensures that you get a dedicated booth with your gang and enjoy the choicest cocktails, beverages, and service. Our bottle service packages come with super surprises.

Book a special night for birthdays to bachelorettes at Barcode Saturdays by featuring on our guest list or making a reservation.

The Ultimate Nightlife Experience at the Heart of Toronto

We’re Toronto’s primary club venue with in-house specialties and chart-busting hits that makes us an instant hit as the ultimate party ritual in the city. Barcode Saturdays is a prime music venue with an accessible taste and an all-around entertainment and party zone for Torontonians. We’re an unmissable nightclub in Toronto, which has been a dazzling hit among locals well as tourists. Our various offerings have lots of surprises in store for you. .

Our guest DJs pump out the greatest and latest Hip Hop, Trap, R&B, Top 40, Latin & Reggae tracks that keep your feet moving and fist-pumping all night long. At Barcode Saturdays, we love the raw and raucous energy that is brought to life every weekend by party animals and freaks in Toronto.

Join our guest list or make a reservation with the most happening club in Toronto.

What Makes us the Best Clubs in Toronto

Barcode Saturdays are more than what meets the eye. We’re more than a routine nightclub with sensational events, music, and the best party destination in town. This has made us a premium club in Toronto for almost a decade now.

We’re preferred and loved by Torontonians because:

Barcode Saturdays have a dynamic dancefloor to get you through it all. We encourage party animals and the swashbuckling groovers to lose themselves on the dancefloor over the hottest gigs performed live. Our inviting bar never hangs you out to dry with premium champagnes to keep the night spinning.

Contact us for reservations and other details at (647) 408-1186 and enjoy the pinnacle clubbing experience this weekend at Barcode Saturdays.

Tune in to a Celebrity Style Affair at Barcode Saturdays

At Barcode Saturdays, we help you to escape the ordinary every Saturday night in Toronto. We’re the city’s top clubbing fixture offering the best dance, drinks, and gastronomic culture that defines every weekend night with pulsating vibes.

With Barcode Saturdays, you can forget about the mundane run-to-the-mill and get set to be part of the most premium club in Toronto. We welcome you with open arms to party like a celebrity at our nightclub with the VIP bottle booth service. Our VIP bottle booth service ensures that you get a private party station with your gang to celebrate the night with a touch of exclusivity. Get access to premium drinks, house champagnes, palatable delights, dedicated sound systems, and impeccable services at your disposal all night long.

Our VIP bottle booth services come with four inviting options, which range as per the offerings and the number of guests you want to host for the night. You can invite your gang and host up to 8 people while treating them over premium drinks, all the while grooving to the top club anthems with a choice of two speakers with Barcode Saturdays’ VIP bottle booth service. 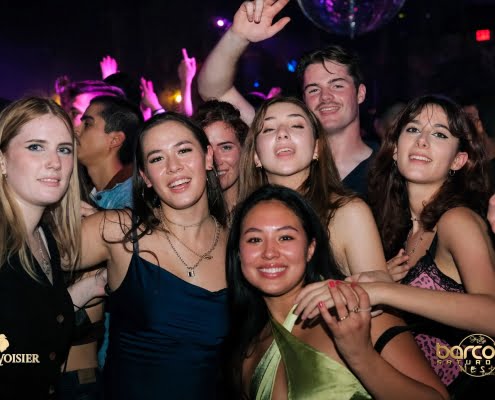 Is It Hard To Get Into Toronto Nightclubs?

Toronto nightclubs are notorious for being difficult to get into, but if you’re going with a group of friends, it can be easier. You may also want to consider getting on the guest list in advance or arriving early and waiting in line. Some clubs have a cover charge just to enter, while others have free entry before 11 pm. Either way, call top clubs like Barcode Saturdays ahead of time so that you don’t end up waiting around unnecessarily!

Do Toronto Nightclubs Have An Age Limit For Entry?

When it comes to nightclubs, the general rule is that they must have an age limit for entry. Nonetheless, this varies depending on the type of nightclub and whether or not there are any live bands playing. For example, nightclubs with live bands generally allow anyone over the age of 18 entry into their clubs, whereas nightclubs without live music will most likely enforce a 21+ policy. To know more, call Barcode Saturdays today!

How Much Does It Genuinely Cost To Go Clubbing In Toronto?

This is a difficult question – as it depends on the time of year & what kind of club you’re going to. If you go with friends, admission can be free or cost $5-$30, but if it’s a high-end club in downtown Toronto, expect a cover charge of around $100. You will also have to budget for drinks, which can be anywhere from $5-$8 per drink, depending on whether it’s beer or mixed drinks. Clubbing is not just a great way to spend the evening, but nightclubs are an excellent place to make connections that could lead to life opportunities!

Can You Wear Jeans To Toronto Nightclubs?

Toronto is known for its nightlife, and there are a lot of great nightclubs in the city. You might be wondering what kind of clothing is appropriate at these venues. Generally, jeans are not permitted. Nonetheless, certain clubs may let you wear them if they’re tailored or skinny jeans. It’s recommended that you dress up with a collared shirt or blouse, dress pants or skirt, and heels if possible.

Is It Ok To Go To Nightclubs Alone?

Nightclubs & bars are places where people go to have an amazing time and enjoy themselves. They are not just for couples or groups of friends – they are also frequented by singles, people who want to meet new people, and more. So there is nothing really wrong with going to a nightclub on your own!

What Type Of Dance Is Most Popular In Nightclubs?

You can let yourself loose & enjoy your night out with any dance moves or styles. Dance styles are always changing, but the most popular type of dance in nightclubs is Latin American dance. After a few years of popularity for Salsa, Merengue, & Bachata, these dances have been making their way across the world. Nowadays, it’s not uncommon to find these types of music playing at nightclubs all over the United States and Canada.

What Do Guys Wear To Toronto Nightclubs?

Toronto nightclubs are a great way for guys to have a night out with their friends. The dress code is not strict, so guys can wear whatever they feel comfortable in. Usually, jeans or dress pants with a shirt will be the most common attire. However, some of the more upscale clubs might require suits and ties. It is best to check before going.